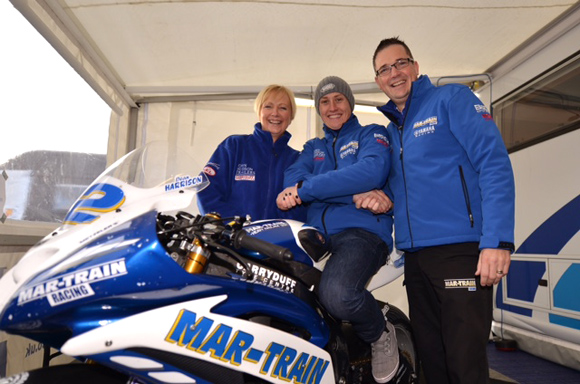 Northern Ireland based Mar-Train Racing, who will represent Yamaha UK on the International Road Racing scene during 2015 & 2016, is pleased to announced that Dean Harrison will continue with the team in all classes [Supersport, Superstock & Superbike] on Yamaha machinery during the same period.

After eight seasons of competition, which has included tangible success both in British championship and on the International Road Racing scene, Mar-Train Racing will now fully focus their efforts ‘between the hedges’ with 25-year-old Harrison as their sole competitor.

Speaking from Milan’s EICMA Motorcycle show, team principal Tim Martin said: “It’s great to finally be able to announce that Dean will be joining us for the next two seasons as we embark on a new venture as Yamaha UK’s official International Road Racing Team. He is the guy we wanted all along having worked with him this season with tangible success, and it’s great that he’s here with us in Milan to see the unveiling of the new bike.”

Martin added: “It’s a real privilege for us all at Mar-Train Racing to be associated with Yamaha UK and I must personally thank Karl Radley for helping us set it up. The two year deal allows us to prepare and develop the new bike and although our goal is undoubtedly international podiums and victories, we will be realistic and professional in our approach to 2015.”

Dean Harrison said: “I’m delighted to finally be able to announce my plans for the next two seasons as part of Mar-Train Racing. To have the support of Yamaha UK as their official team is fantastic, and although we have had some great race wins on the R6, I have to be honest and say I’m really looking forward to riding the all-new Superstock and Superbikes next season.

“The Mar-Train team is a family run effort, but you only have to look at what they have achieved in British championship, and also at the NW200 last year, to understand how committed the whole team is to transferring that onto the roads in a full time job next season. It’s important for me to enjoy my racing and having been here a year already, I know that 2015 is going to be a belter!”

2015 Race Schedule
Mar-Train Racing will announce their full racing schedule at the beginning of 2015, but the initial plan is to add the Southern 100, the Scarborough events and hand-picked national road races in Ireland to the all-important Internationals campaign at the Ulster Grand Prix, North West 200 and Isle of Man TT.