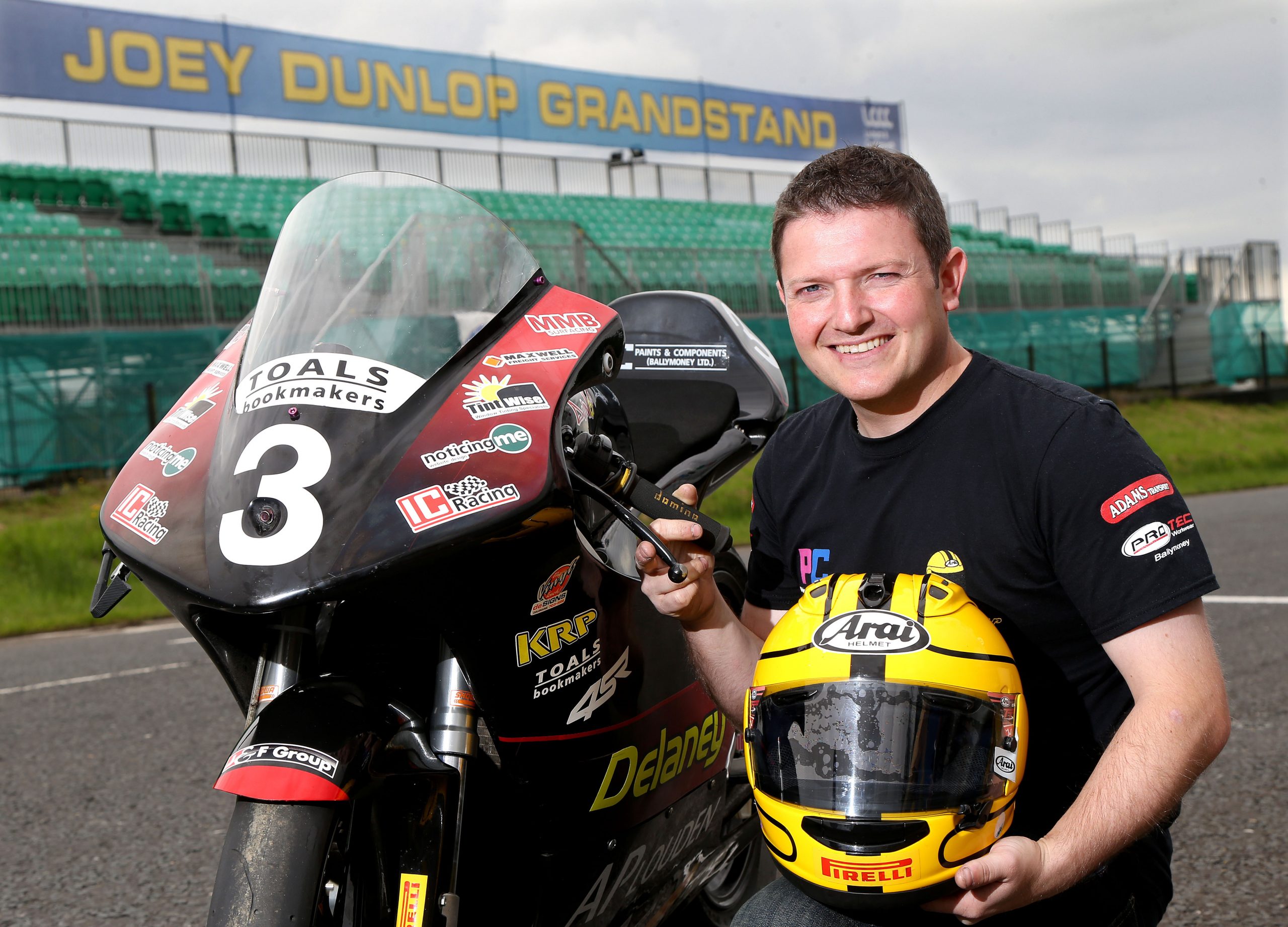 Gary Dunlop says he has been waiting all year for the MCE Ulster Grand Prix to come around, after making his road racing debut at the Mid Antrim 150 in April.

The 33 year old from Ballymoney, whose legendary father Joey is the most successful rider in history, with 48 wins at the famous Dundrod circuit and 26 wins at the Isle of Man TT races, will compete in the Ultralightweight or ‘125’ class at both the Plant Lubrication (NI) Dundrod 150 and the MCE Ulster Grand Prix.

Gary was just 16 when his father passed away in 2000 following a crash in Estonia and at age 17, he began competing at Irish short circuit level before deciding two years later to give it up to help run the family pub in Ballymoney, ‘Joey’s Bar’.

His return to competitive racing comes a year after becoming involved in running the Joey’s Bar Motorcycle Club team, which aims to improve the grids in the 125cc and 250cc classes, which have dwindled over the years.

Talking about his decision to start racing again, Gary said: “It all started off as a bit of fun. William (Dunlop) was going to ride my 125 at the Sunflower to help boost the grids, but the week before he was meant to go testing at Kirkistown he phoned me to say he couldn’t make it. He suggested that I jump on it and ride it round to see if the bike was set up right.

“That was alright, it took me a day or two to think about it but I did it and I actually went pretty well. William then pulled out on the Wednesday night before the Sunflower and he said ‘why don’t you do it, get a bike out on the grid, scoot around and have a bit of fun.’ I decided the next morning that I would. I did a medical that same day and got a licence that night from the MCUI.

“That was only a short circuit though. Another rider, Melissa Kennedy, was carrying on with me and said that I was maybe scared to do the roads and it sort of burnt into me a bit and got me really considering it. That’s when I decided to go for it and I think I would always have regretted it if I didn’t.

“I’m really happy with how I started out with a fifth place at the Mid Antrim. I think that because I went so well earlier on in the year, I’m nearly disappointed now as my expectations shot up but the results just haven’t been there for me. It’s probably because I’ve been so busy running these other bikes, plus a bit of bad luck with the bike that I’m riding myself,” he said.

When asked about what made him put in an entry for the MCE UGP, Dunlop simply stated: “Oh, I had to. It’s the only race that I’ve actually been looking forward to all year. There’s others that I’ve sort of been interested in but none compare to this one. Dundrod has been the one that I’ve looked forward to from the very first race.

“I have so many childhood memories running about Dundrod; I grew up there. Playing in the wee stream down the bottom of the paddock, messing about on the bicycle in round where the scrutineering bay is, and obviously watching all those great races through the 80s and 90s. It’s like a home from home for me.

“The memories I have of my Dad racing there are ridiculous. He has the record for the most number of wins at Dundrod but it’s not just that… I know everybody probably thinks it’s the TT and he did love the TT, but Dundrod was his favourite course.

“I mean, everybody that’s really interested in road racing is going to say that this is their favourite, it’s pretty much agreed between all the riders, all the big riders, that this is the place they love most.

“The memories are there every year, my Dad came away pretty much every time with something and it means a lot to me to race this track. I love it just the way he did.

“Noel, the clerk of course, has given me rider number 3. I wasn’t too sure about it at first as it’s my Dad’s number and it’s a bit strange for me but it’s a nice legacy and if it helps give a bit of publicity for the 125 class and the Ulster Grand Prix then I’m happy,” said Gary.

The MCE Ulster Grand Prix is the world’s fastest road race, a daunting prospect for anyone competing there, but especially for newcomers to the event.

“Because it’s so fast I’m actually a wee bit wary, I’ve never ridden a circuit as fast as this before, nothing even close to it,” said Gary.

“I don’t actually think I’ll be that good straight away. I had thought about doing a fast short circuit somewhere before the Ulster but because I’m running so many bikes I haven’t the time to get anything done. Saying that, I know every corner on this circuit but riding round it on a bike is going to be a completely different story.

“There’s so much competition in the ultralightweight class this year. Christian Elkin has to be the favourite with the Moto 3, Sam Wilson – if he’s in the mood he’s just in a different level. Paul Jordan’s brilliant, Adam McClean, Nigel Moore, Paul Robinson and Derek McGee will be up there. There’s just so many boys that could win it and that’s what we want to see, it’s great for the fans.

“There are so many 2 stroke fans there as well. The 2 strokes have been suffering a bit for a few years now and getting a bit of a knock from people who maybe don’t understand them as well so it’s going to be good seeing so many back out on the grid.

“My aim is just to get round in one piece and enjoy it to be honest. And it’s not just me to think about, I have young Sam Wilson riding for the team, Derek McGee is riding one of the nights for us and my cousin Paul is riding another night, I’ve another two cousins out there too. It’s great to get good results but I don’t really set any goals. Everybody getting back safe after a good day on the track is what makes me happy,” he said.

Noel Johnston, Clerk of the Course at the MCE Ulster Grand Prix said: “I was delighted when Gary decided to put his entry in. He’s a great lad with a lot of family history at the circuit, making him one of the highest profile newcomers we’ve ever had.

“I know he has been itching to get here and give it a go. It’s a very competitive class he’s riding in, and it goes without saying how fast the circuit is, but he has his head screwed on and I know he won’t put himself under any unnecessary pressure to get results. Having said that, he’s got the Dunlop blood running through his veins and I’d be surprised if he doesn’t perform well.

“I think there will be more than a few people who will be happy to see that famous yellow helmet flying around the circuit once more,” added Noel. 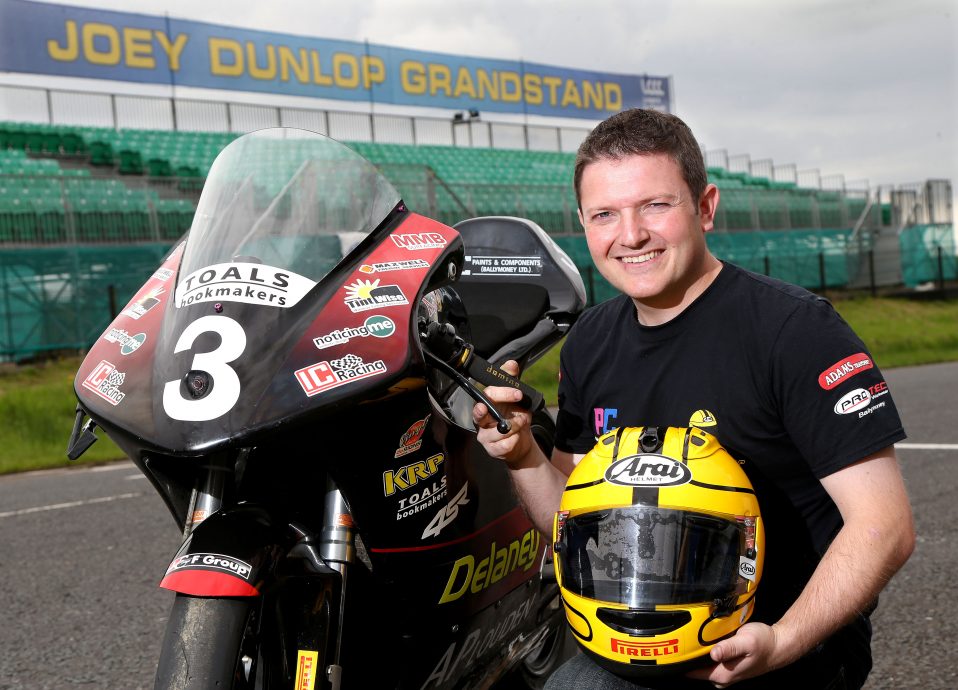 Gary Dunlop, son of the legendary Joey Dunlop pictured at the MCE Ulster Grand Prix ahead of his debut this week. 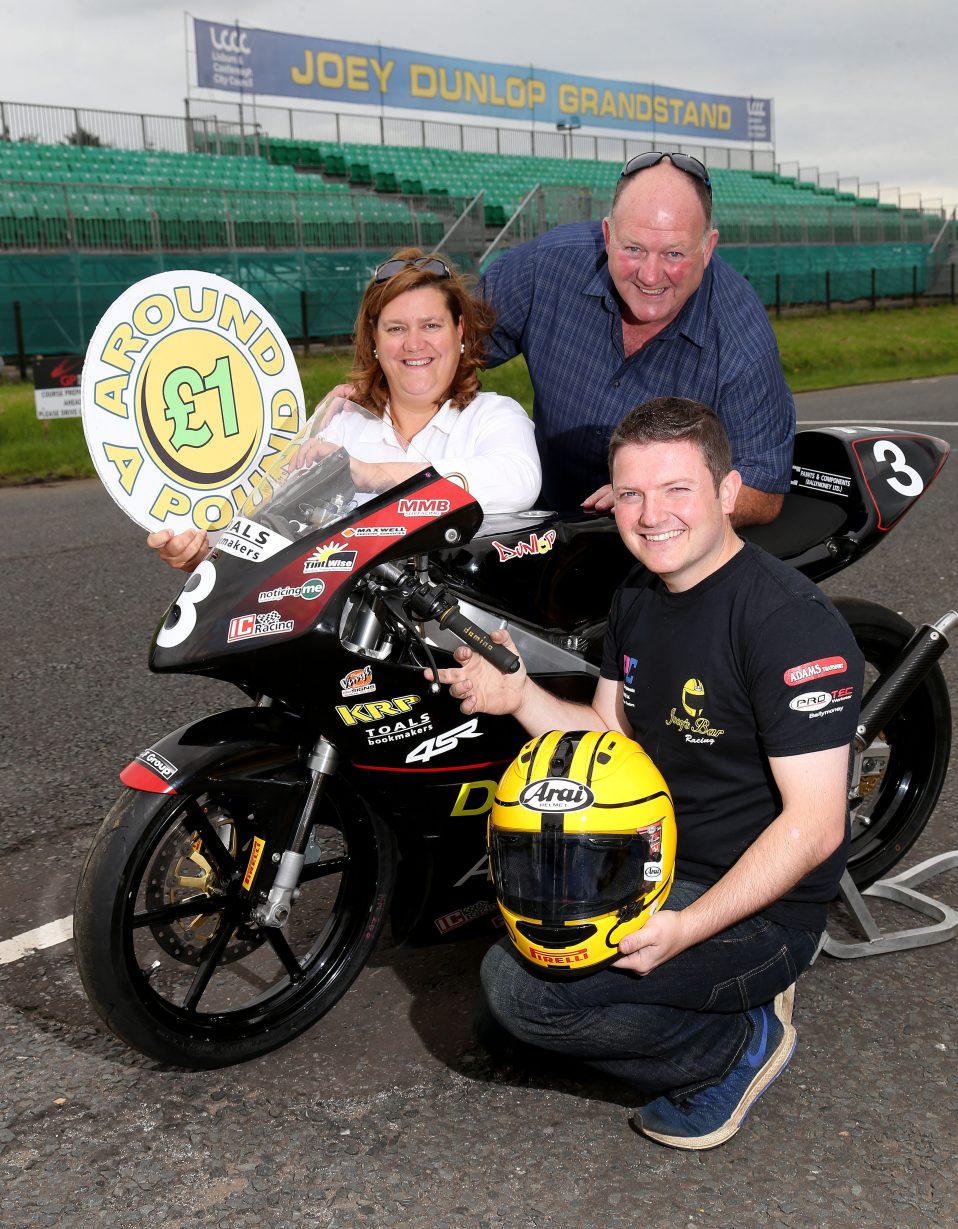 Siobhan and Gerard Rice of Around A Pound, race sponsors at the 2016 MCE Ulster Grand Prix pictured with Gary Dunlop ahead of his MCE UGP debut. 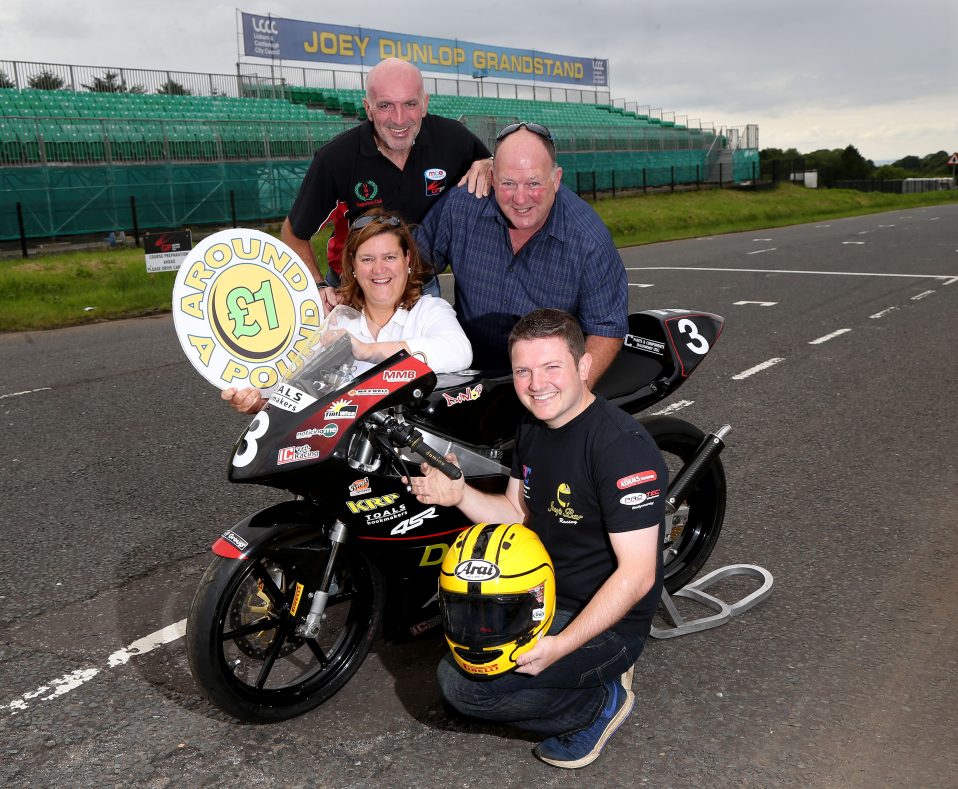 Gary Dunlop pictured ahead of his debut at the MCE Ulster Grand Prix along with Noel Johnston, Clerk of the Course and race sponsors Siobhan and Gerard Rice of Around A Pound.