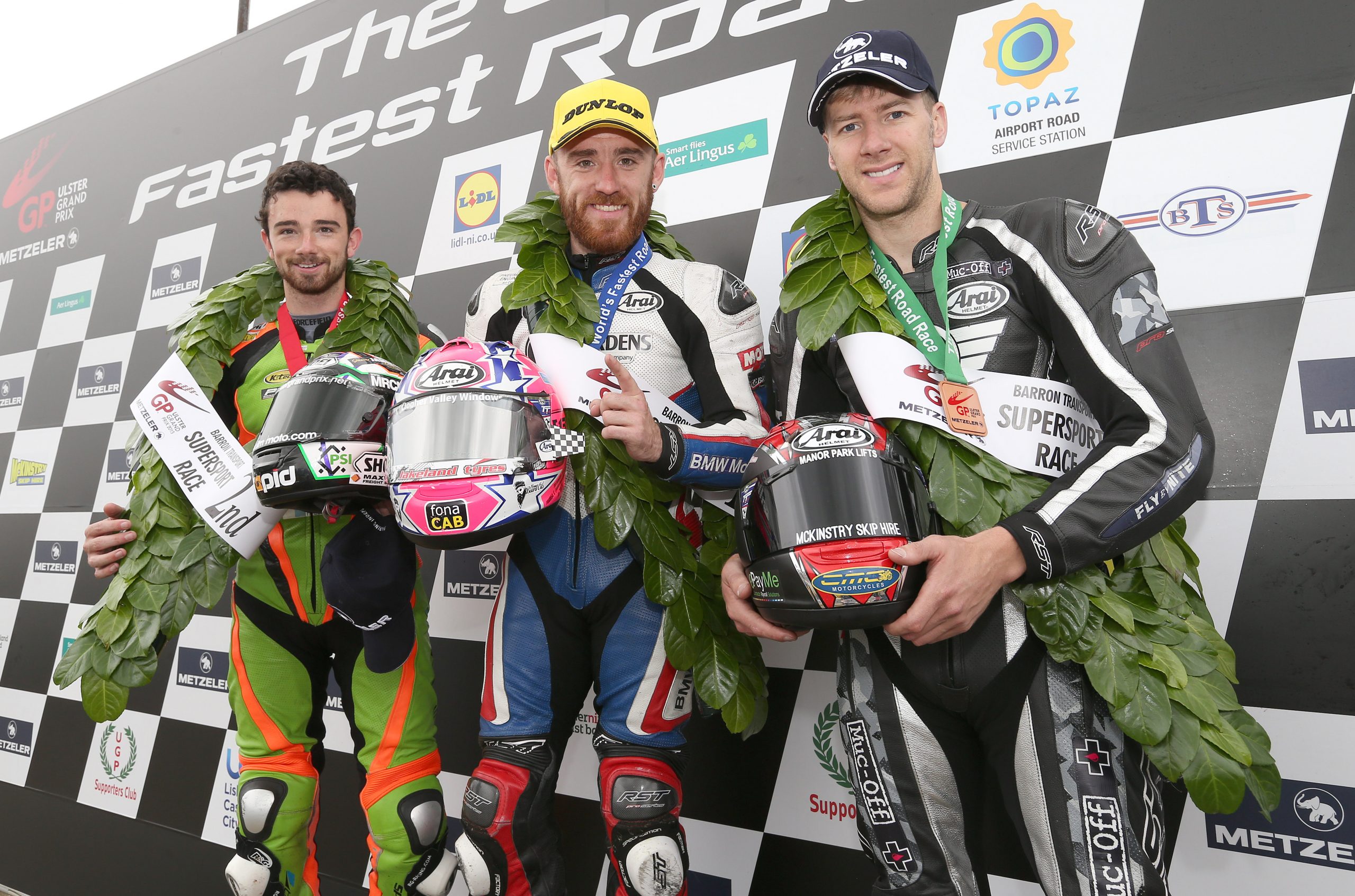 LEE Johnston joined a long list of treble-winners at Dundrod as he claimed three wins and the overall ‘Man of the Meeting’ title at the 2015 Metzeler Ulster Grand Prix.

The East Coast Racing rider recorded victories in the Superstock race and both Supersport races, as well as a third place finish in the opening Superbike outing to complete a dominant display that also saw him set new lap records in the two classes.

The day started in glorious sunshine with the Superstock machines first out on track. As the race got underway Peter Hickman was the early leader, controlling the first four laps before Johnston set a 132.793mph lap and took to the front.

Hickman fought valiantly to regain the lead but Johnston held on to take his maiden win at the Metzeler Ulster Grand Prix by just 0.09 of a second, with a hard-charging Michael Dunlop third.

Johnston was then back out on track straight away as the first Supersport race got underway and it quickly became a battle between him and William Dunlop.

Riding the CD Racing Yamaha, Dunlop and Johnston switched places regularly on the last lap but for the second time Johnston was able to hold on aboard his 675 Triumph. Glenn Irwin was 2.3 seconds further adrift as the Gearlink Kawasaki rider landed his first international podium at Dundrod, while Anstey and Hutchinson rounded out the top five.

After his second win Johnston said: “I had a real good fun ride with William and we’re good friends, but I still couldn’t let him win. It’s the same as the first race, big credit to the boys. We made a little change not knowing which way it would go but we’re happy.”

Race 3 saw the Ultralightweight and Lightweight bikes in action and it was Sam Wilson on the Joey’s Bar 250 that took a popular victory in the Lightweight class ahead of Neil Kernohan and James Cowton, with pole-sitter Paul Owen fourth and Michal Dokoupil top 400cc rider in fifth.

Christian Elkin was the runaway winner of the Ultralightweight class, leading Conor Behan and Nigel Moore home as conditions remained bright and dry at Dundrod.

Race four was the first Superbike race and it was an intense five-way battle between Johnston, Hutchinson, Hickman, Conor Cummins and Bruce Anstey.

Less than one second covered the top five and as the lead changed hands corner to corner it looked likely to be a classic last lap decider, until a red flag forced the race to a premature end.

Anstey was declared the winner on countback, with Hutchinson second ahead of Johnston, making the New Zealander the only rider this year to win two international Superbike races.

Supersport race 2 was next on the schedule and it was Glenn Irwin who led off the line, keen to improve on his earlier third place, but as rain began to fall over the circuit there were six other riders battling for the lead, including Keith Amor, Dean Harrison and William Dunlop.

As the top seven jostled for position it was Irwin who was leading once again onto the fourth lap, but the race was then red flagged following an incident on track.

The result was taken back and it was Johnston again who was declared the winner ahead of Irwin, Hutchinson, Harrison and William Dunlop.

Following the red flag and a break in racing, the organisers then announced, with much regret, that Scottish newcomer Andy Lawson had succumbed to the injuries sustained in the earlier incident in the second Supersport Race.

At the insistence of Andy’s family, friends and team, the meeting continued, and it was the Supertwins who were up next.

Race favourite Ivan Lintin had crashed out of the earlier Superstock race leaving him unable to take his place on the grid, and as the rain continued to fall his closest rival, Glenn Irwin, quickly fell out of contention as well.

It was Derek McGee who mastered the conditions to take his maiden international win, beating James Cowton and Daniel Cooper. Irwin was fourth, ahead of Alistair Kirk and Christian Elkin.

Following subdued celebrations it was time for the final race of the day and as conditions continued to deteriorate it was Peter Hickman, who made his debut at Dundrod in 2014, who claimed his first international win.

The Briggs Equipment BMW rider led from the start, with Conor Cummins closing with every lap, but Hickman held off to take the checkered flag. It was Michael Dunlop who completed the top three, with Keith Amor fourth and Russ Mountford an impressive fifth.

Full race results are available under ‘The race’ tab.