Proven on the roads – Ian Hutchinson 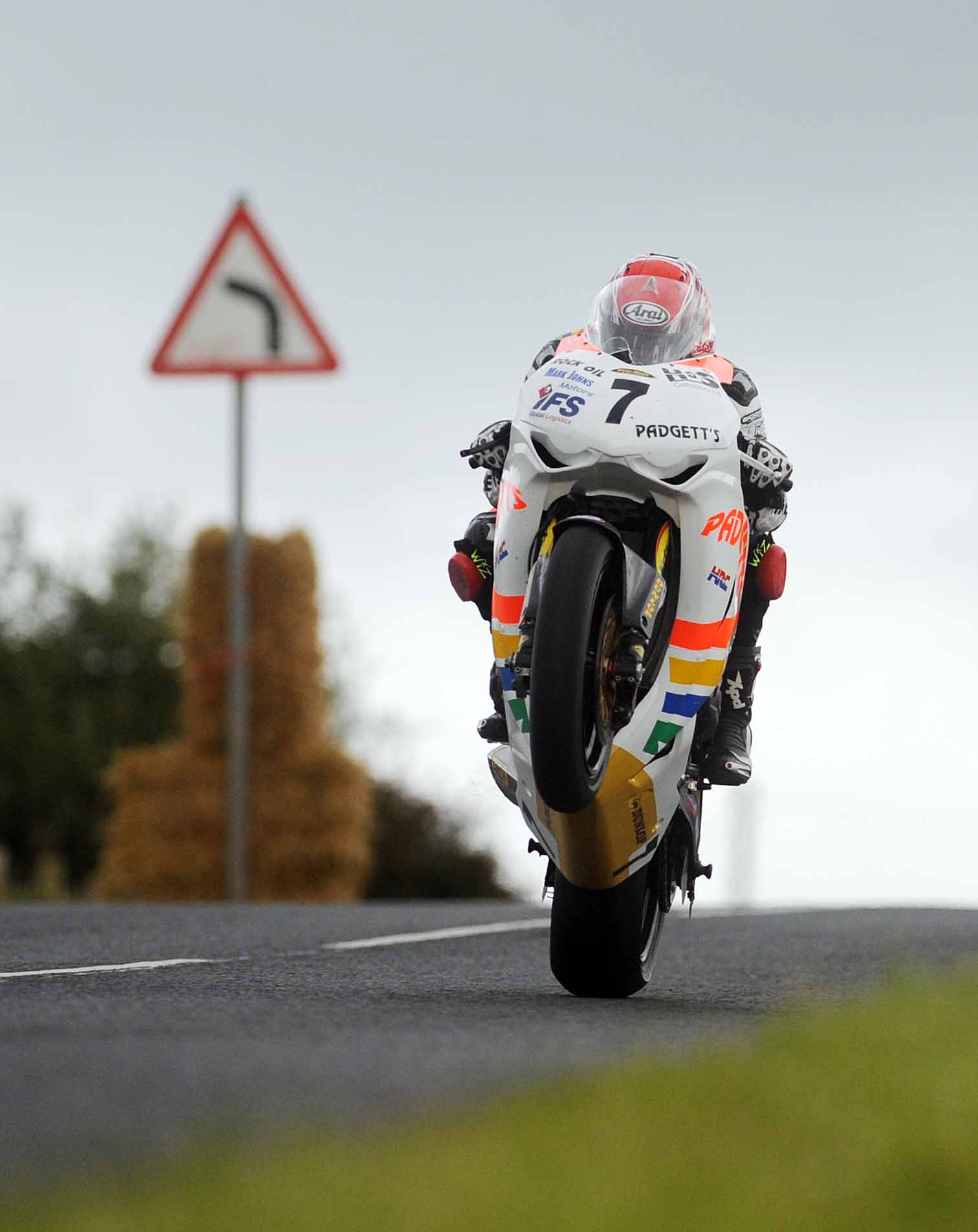 Road racing star and man of the moment Ian Hutchinson is one of biking’s toughest competitors.

He has eleven TT victories to his name, as well as wins at Dundrod, but he’s also experienced more bad luck and misfortune than most.

The Bingley Bullet broke his left leg when he slipped off his Padgett’s Honda at Silverstone in September 2010. The resulting compound fracture was so serious that surgeons initially felt that amputation of the mangled limb was the best course of action.

The following 12 months saw Hutchy have an external fixator attached by specialists at Coventry University Hospital and 19 operations, some lasting for as long as 16 hours.

His treatment was initially thought to be a success, and although much of the 2011 season was wiped out, he made a triumphant return to racing, piloting his Swan Yamaha R1 to third place at Macau.

In January 2012 he underwent a routine operation to correct an issue with his left foot, but the wound became infected – and a month later his left leg snapped as he put his foot out to stop himself falling off a mini-bike when he was racing other stars at the MCN Live show.

Again, surgeons attached the fixator, and in April he returned to the same hospital to have it removed for the NW200 and the IoM TT.

It was during this visit when things quickly started to deteriorate – Hutchinson learnt that the bone in his left leg was infected and that he would need a massive graft, which would involve removing the infected tibia and performing a bone transportation operation.

Hutchy pleaded with the doctors to delay the procedure so he could go racing, and even persuaded them to remove the fixator.

He had an impressive TT that year – he took eighth place in the opening Superbike race, at an average speed of 123.827 mph, a 9th place finish in the first of the two Supersport 600cc races astride the R6 Yamaha, with a race speed of 119.283, 11th place in the Superstock race and a highly praised sixth place in the second Supersport race.

Then in August he had 10cm of infected bone removed, and the bone grafting process began.

The procedure was a success and he returned to racing in 2014, some 28 operations after that fateful day at Silverstone, with a specially modified bike with the gearshift moved to the right-hand side.

And now in 2015 he seems back to his best – he was on the pace at the NW200 and claimed a podium in the Superstock race.

After all of these highs and lows, Hutchy and his kit have been through the wringer, and he knows what works, and just as importantly, what doesn’t.

Helmet: “Obviously you need to think about a lot of factors when choosing a helmet – the materials, the fit, the vision it offers, the comfort, the ventilation, the strap and the noise. However, having said all that my primary concern when I’m racing is to have a helmet that’s safe.

“On the roads there’s no room for error. There are no gravel traps or anything, get it wrong and you’re going to hit something hard, so it’s important for me to have something that’s proven.

‘I’ve worn an Arai since I started riding, and I choose them because they’re the best of the best in terms of quality. They’re at the top of the tree in terms of crash testing and safety and the top riders across all the paddocks put their trust in them, which tells you everything you need to know.

“I’ve had my fair share of big offs and my helmet has never let me down. Everything’s worked exactly as it should do and they’re bloody comfortable too. You’re in the saddle for the best part of an hour and three quarters, so you need everything to fit right. And it does – the vents are powerful and the vision’s excellent. I can’t fault them.”

“They can’t be too loose otherwise they’ll move in the event of a spill and won’t be as protective as they should be; too tight and they’ll be uncomfortable and take your mind off the road ahead of you.

“Obviously they need to have armour in the right places. I’m not bothered whether the armour is external or internal, as long as there’s armour in the critical areas then it’s job done.

“And I’m not one of these riders that needs to wear Kangaroo leathers. I wear off the peg RST cowhide leathers and they’ve proven to be great. They’re comfy but tough, and I’d have no hesitation in recommending them to anyone.”

Back protector: “I can’t understand why anyone would ever consider riding without a back protector. I’d never contemplate riding without one, and people who say they’re uncomfortable are talking rubbish. There are so many on the market you can find one that suits you, and mine’s so comfortable I don’t even know it’s there.

“I wear a Dainese one that I’ve had a few years now and it’s great, although I’ve worn other brands in the past and they’ve been equally as good. For me a back protector is like a helmet, it’s an essential part of my kit.

“Having said that I don’t wear a chest protector. I suppose it’s because I notice it when I’m tucked in with my chin flat to the tank and I find it a little uncomfortable.”

Gloves: “You’re looking for the best combination between protection and feel. Yes, gloves need to be protective, ideally with lots of sturdy external armour on the knuckles and on the outside of the hand, but if the material is too thick it will restrict movement and feel through the fingers.

Your hands and fingers are the key to controlling the bike – levers, cutch and throttle – so it’s worth spending time trying on several pairs and finding the right pair for you and your needs.

“I wear RST and they’re great. They’re supple yet reassuringly protective and offer decent levels of feel through the fingers.”

Boots: “You want something that’s protective enough to support your ankle and toes, and comfortable enough so you can steer through the pegs with no issues. And if they’re light with a decent sole so they don’t slip, then that’s even better.