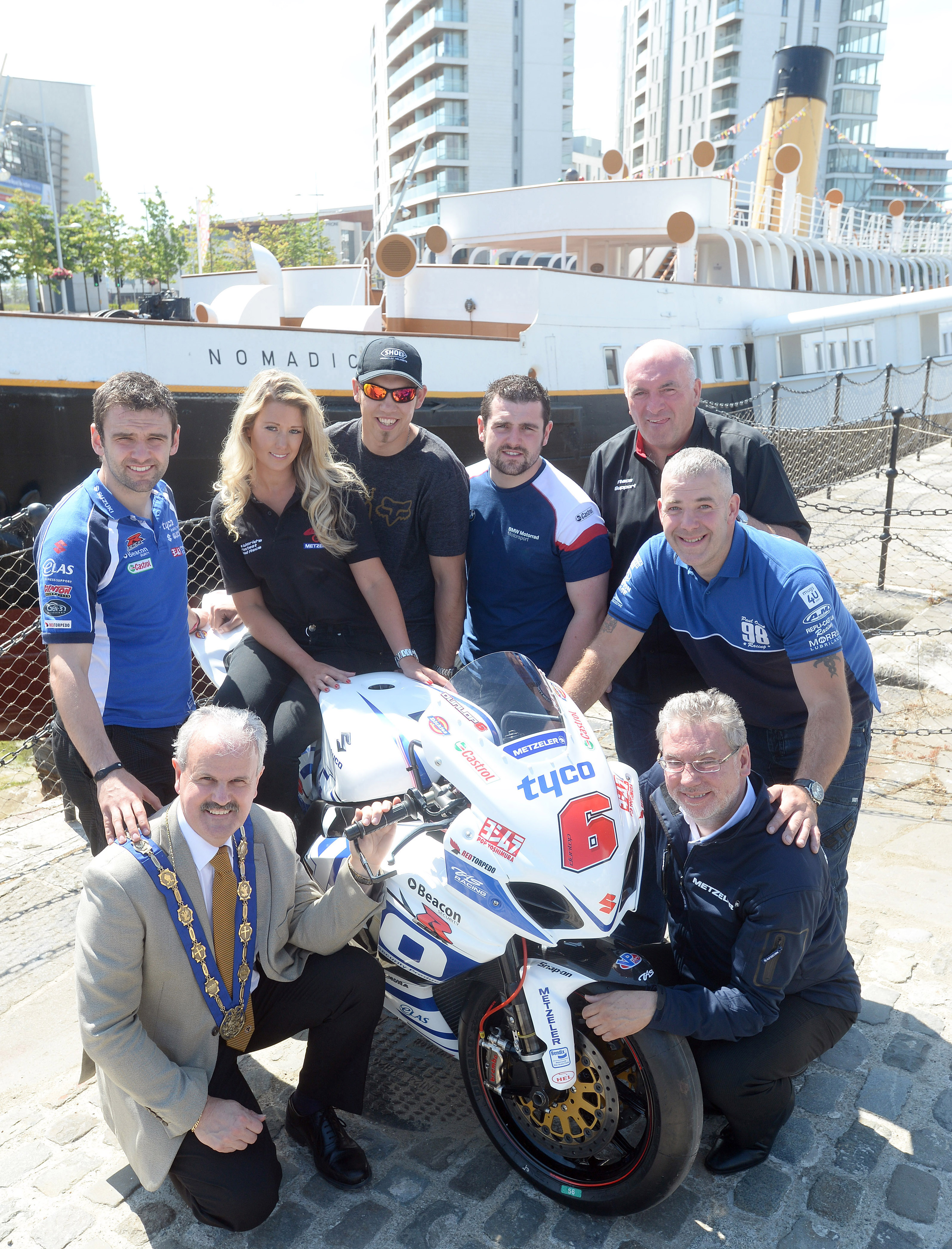 Some of the biggest names and brightest talents in real road racing have come together on board the SS Nomadic, Belfast to launch the 2014 Metzeler Ulster Grand Prix and give fans an exciting preview of this year’s event.

Local riders Michael and William Dunlop, Jamie Hamilton, and Stephen Thompson joined Dean Harrison, Paul Owen, Peter Hickman and Dan Kneen as they discussed their hopes for the final international road race of the year and reflected on their seasons so far.

The organisers also confirmed a star-studded competitor list as they make their final preparations for the 92nd Metzeler Ulster Grand Prix.

Clerk of the Course at the Metzeler Ulster Grand Prix, Noel Johnston said: “It never seems to be long before the UGP comes around. I still get excited every year and once again we have a fantastic line up confirmed for the fans.

“Man of the moment Michael Dunlop will be there, hoping for more wins off the back of his sensational TT, while Guy Martin, William Dunlop, Gary Johnson and Bruce Anstey will be out in force once again.

“The depth of talent in each class is stronger than ever as we see a new generation of racers coming through. Dan Kneen has been a sensation on the Irish National scene this year, winning races on tracks he’s never even seen before, while Dean Harrison is another star in the making after his Lightweight TT victory.”

During the launch, Johnston also confirmed that Peter Hickman, the fastest ever newcomer at the TT, will make his debut at the Dundrod circuit in 2014.

“I’ve spoken to Peter and he’s looking forward to another new challenge and the chance to be the fastest ever newcomer at the world’s fastest road race.”

Speaking at the event, Barry Urand, Key Account Manager for title sponsor Metzeler said: “We’re proud to again be associated with the World’s Fastest Road Race, in our second year as title sponsor.

“Last year we experienced success on the track with Guy Martin and had great visibility at the event, helped by the tireless efforts of the dedicated UGP organisers.

“This time around we bring an even stronger line-up of riders with Guy, William Dunlop, Dean Harrison, Steve Mercer and hopefully Gary Johnson, if fit. We have also invested in a new race truck for the paddock to help supply all the big ‘names’ and crucially those unsung heroes, the privateer riders.

“Our 2013 road racing campaign helped develop the new METZELER SPORTEC™ M7 RR, a cutting edge Supersport tyre for the road, so the Ulster Grand Prix has certainly played its part in giving us both silverware and the chance to develop new products.

We thank the Ulster Grand Prix organisers for their partnership and look forward to returning to the event in August!”

Local favourite Michael Dunlop, who already has 6 wins at the Ulster Grand Prix under his belt, said that despite a stellar season so far there can be no guarantees at Dundrod.

“This will be all new territory for the BMW. It’s never been round this track before and we’ve been doing plenty of work on all the bikes to have them as ready as we can. We will just have to see how things go, but there’s no reason we can’t get a good result in every class.”

When asked about the prospect of lap records, Dunlop was keen to play down his chances this year.

“There are a lot of factors. It depends on the wind as much as the rain, and while the BMW is a quick bike you just don’t know until the day.”

Discussing his hopes for the 2014 event, Bradford ace Dean Harrison said: “I didn’t have the best of runs last year at Dundrod. A 4th in the ‘stock race was probably my best result and we struggled badly with power all week.

“This year we have new engines so I don’t think our speed will be a problem, and really the podium is the target. Anything more is a bonus.”

The 25 year-old is unlikely to enjoy more success in the Lightweight class however, as he revealed that he plans not to compete in the supertwin race at the UGP.

“I don’t think we’ll be out on the supertwin at the Ulster, there are just too many races to fit in and I’d rather be out on the bigger bikes,” he added.

Alderman Paul Porter, Chairman of the Leisure Services Committee of Lisburn City Council said: “The Metzeler Ulster Grand Prix is one of the most exciting events in Northern Ireland and beyond.

“On the behalf of Lisburn City Council may I extend our good wishes to the Dundrod & District Motorcycle Club and to wish everyone a successful and safe event in August.”

The Dundrod & District Motorcycle club also confirmed new developments around the track, as the grandstands at Smyth’s, Leathemstown and the hairpin have been upgraded and there are plans in place to introduce an additional ‘big screen’ for spectators. 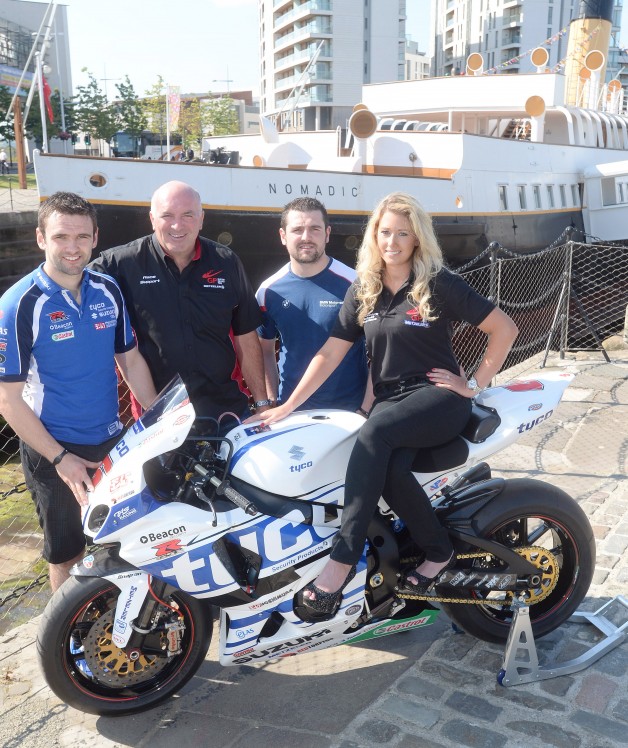 Pictured at the event is William and Michael Dunlop with Clerk of the Course Noel Johnston and UGP grid girl Sorrel Flack. 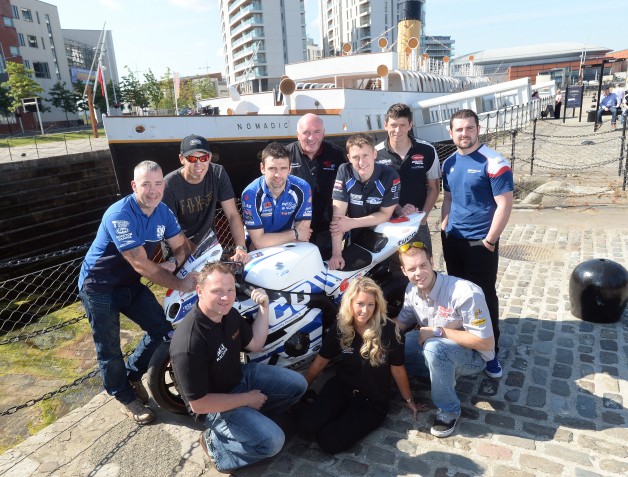 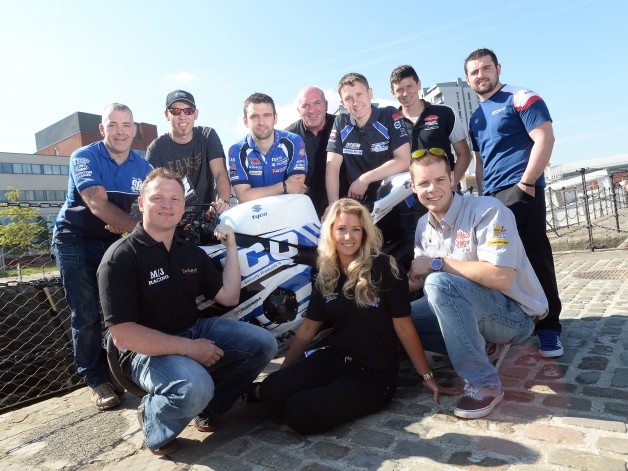