‘Super twins’ back Supertwins at the Metzeler Ulster Grand Prix 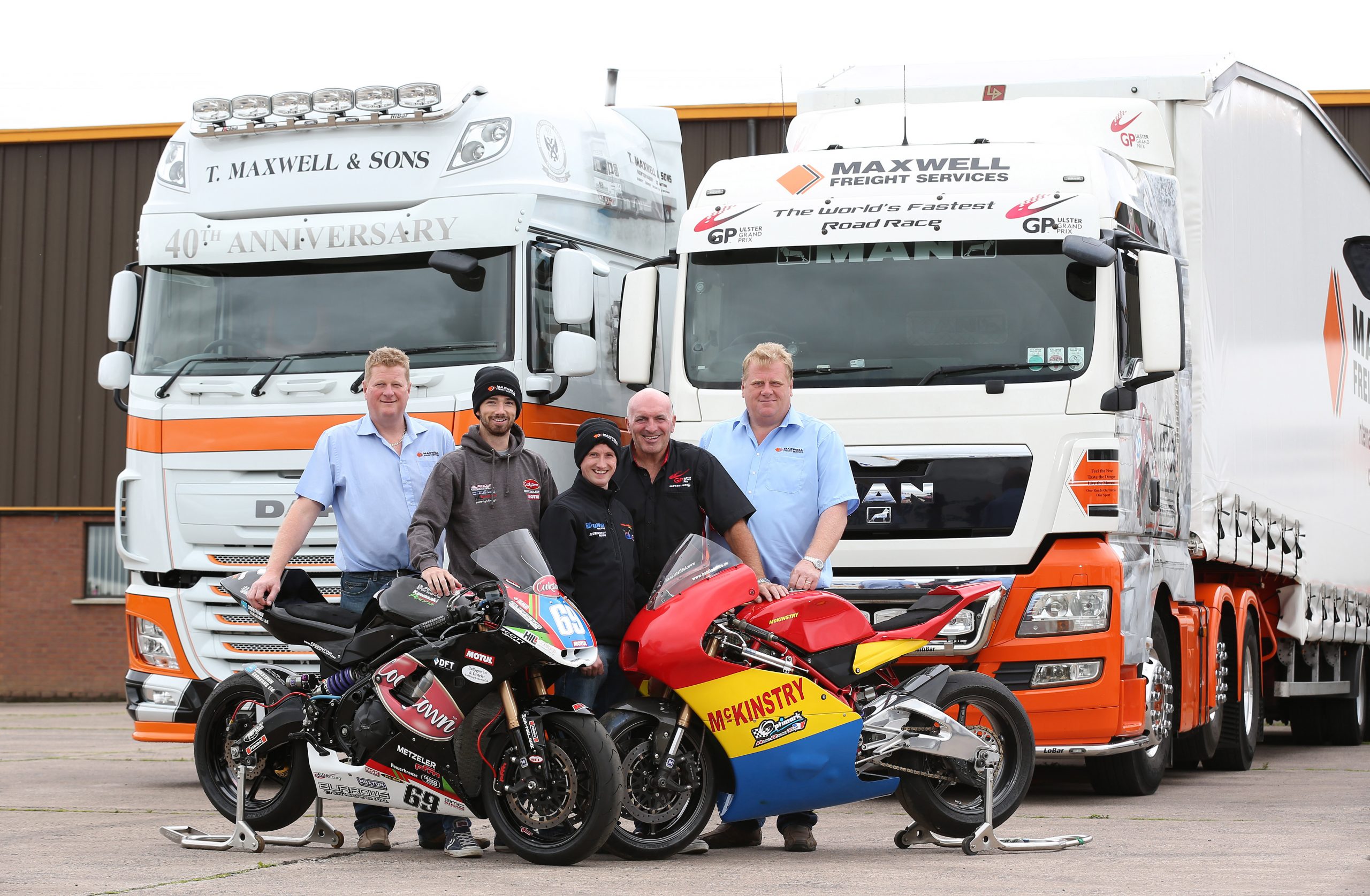 CRUMLIN-based haulage firm, Maxwell Freight Services, has been announced as the official sponsor of the Supertwins race at the 2015 Metzeler Ulster Grand Prix.

The company, which is celebrating its 40th anniversary in 2015, is owned and managed by twin brothers Terry and Tommy and provides haulage, storage and distribution services throughout the UK and Ireland.

Their sponsorship continues their long association with the Metzeler Ulster Grand Prix and real road racing. The company has sponsored riders and races for many years and in 2012 they even re-sprayed one of their lorries with a custom UGP paint job featuring some of the UGP’s biggest names, including Joey Dunlop and Guy Martin.

For 2015 Maxwell Freight Services is officially supporting the Supertwins race, which promises to be another hot contest. Although Ivan Lintin has enjoyed back-to-back victories in 2013 and 2014, there are a number of riders who plan to make sure he doesn’t make it a hat trick.

Christian Elkin is one, having signed to race the McKinstry Racing machine vacated by Lintin, who has now moved to the RC Express team.

Elkin said: “Ivan won this race for the last two years and he had a great TT so he’ll definitely be up there, but we’ve got a good package ready to take him on.

“I haven’t had a lot of time with the bike on the roads but it went really well around Scarborough and I lapped Kirkistown just above the lap record first time out, so I think we’ll be there or there abouts.

“For me personally I want to build on last year. I had a podium on the Moto3 machine and then I was 4th at this year’s North West 200, so the plan is to go one better at the Ulster.”

Alongside Elkin, another man hoping to be in contention is Carrick racer Glenn Irwin, who announced last week that he will ride for John Burrows’ Cookstown/BE Racing team at Dundrod.

Irwin said: “John’s put a lot of work into the bike and it’s shown massive potential at the North West and the TT with Jamie Hamilton. It’s been setting really strong lap times all year.

“I’ve now got a year’s experience at Dundrod on the Supertwin so I think we’ll be in a really good place come Bike Week. It’s not just the strength of the bike though, John’s entire crew is a big bonus too.

“It’s an experienced, local set up and there is a real buzz around them. I thrive off that so I’m excited to get out. It will be a close race but we are definitely going there to win, that has to be the aim.”

Alongside Irwin and Elkin on the grid will be some of the brightest young talents in the sport, including Derek McGee, James Cowton and Connor Behan.

Tommy Maxwell, who owns Maxwell Freight Services with brother Terry said: “The Supertwins race is always one of the closest battles on track and we’re really pleased to be able to support this year’s event, and the timing is perfect for our 40th anniversary.

“It’s a fantastic event and our association with the sport goes back many years, as we’ve known Noel Johnston, the Clerk of the Course for a long time.

“It was through him that we first started sponsoring the event, as we wanted to put something back into the local community, and then of course there is the twins connection with the race we sponsor which is a great bonus.

“We also grew up close to Dundrod and watched the Ulster Grand Prix for many years, watching greats like Tom Herron, so we’ve always loved the noise and the smell of it all. We’re looking forward to another year of close, safe racing.”

In their 40-year history, Maxwell Freight Services has grown from one rented lorry to a fleet of almost 50 vehicles and 250 trailers. The company now employs 70 staff at their headquarters in Crumlin,

Noel Johnston, Clerk of the Course at the Metzeler Ulster Grand Prix said: “Tommy and Terry are two great characters and we’re delighted to have them on board for 2015.

“They’ve supported riders for many years and they have a strong family connection to the sport as their father, Tommy Sr. did the same before them. It’s a little known fact that he actually helped to arrange fishing boats to transport Joey’s bikes to the Isle of Man ahead of the TT.

“They’re also heavily involved with hot rod racing, so you can’t question their passion for motorsport, and their contribution towards the Ulster Grand Prix over the years has been invaluable.

“It’s thanks to companies such as Maxwell Freight Services that we are able to drive our event forward and without them all we simply couldn’t go racing, so I’d like to thank them for their continued support.

“They’re backing what promises to be one of the closest races of the day, I’m sure it won’t disappoint.”