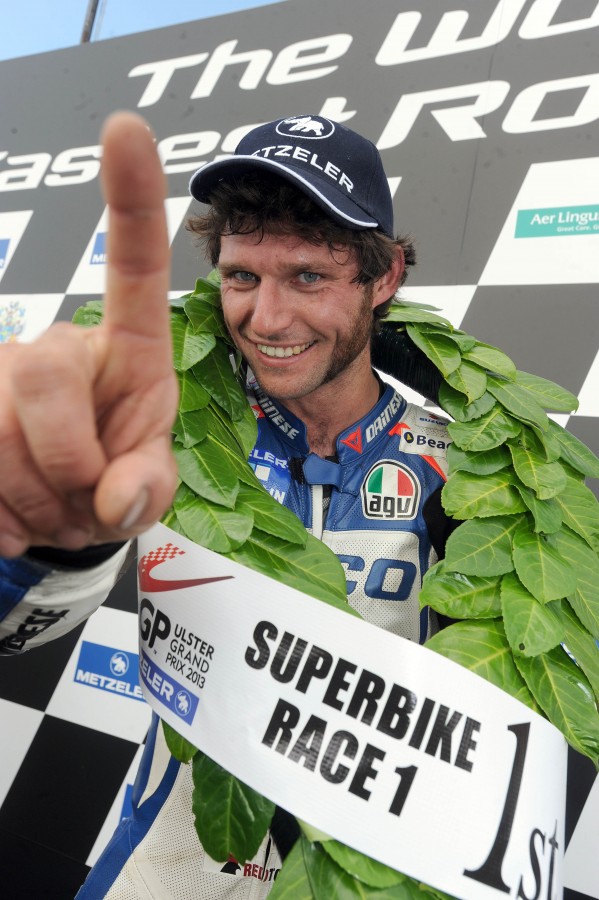 It was a successful conclusion to the German manufacturer’s road racing summer of activities, as Tyco Suzuki rider Guy Martin took victory in the Supersport and feature Superbike races, while Ivan Lintin secured a surprise win in the Lightweight class. Gary Johnson and Dean Harrison also enjoyed strong performances in the Superstock race.

Following weather affected practice week, which saw the cancellation of the Dundrod 150 Races on Thursday, Metzeler enjoyed a victorious day on Saturday as they completed the first of three years as title sponsor of the Ulster Grand Prix.

The opening Supersport race was held in damp but drying conditions and it was the Metzeler shod Tyco Suzuki GSX-R600 of Guy Martin, who recently announced he will be remaining with the team for 2014, who took the ‘holeshot’. Leading for the majority of the five lap race, and despite increased pressure from the experienced Bruce Anstey on the final lap, Guy was able to take victory, crossing the line ahead Anstey by just 0.075s.

To the relief of the thousands of fans who had packed the banks and hedgerows that line the 7.4 mile road circuit, the sun appeared ahead of the Superstock race and it was Lincs Lifting Kawasaki rider Gary Johnson who led for the opening lap. Unable to hold off Isle of Man TT hero Michael Dunlop, Johnson crossed the finish line to claim second place, giving Metzeler their second podium of the day. RC Express Kawasaki rider Dean Harrison enjoyed a well-earned fourth place while Supersport winner Martin was unable to match his earlier success, being forced to retire on the opening lap.

Throughout the ‘roads’ season, the Lightweight category has been a close run affair, and fans at the Ulster Grand Prix were once again treated to an enthralling, fairing rubbing Lightweight race that came down to the final lap, with Metzeler supported Ivan Lintin fending off Jamie Hamilton to take the victory.

A dry track greeted riders for the main event of the day, the Superbike race, and it was once again Supersport winner Guy Martin who wrestled the lead from the two Dunlop brothers from the start. Setting about commanding the race from the front, Martin and Michael Dunlop played a race long game of cat and mouse which came down to final lap, and it was fan favourite Guy Martin who took the victory on his GSX-R1000 by 0.054s ahead of current king of the roads, Michael Dunlop.

A problem for Martin in the second Supersport race forced him to retire on the first lap, however he was able to bounce back in the final race of the day, the second Superbike race, claiming a dominant victory as he lead from the off,  to complete a trio of wins.

Guy ended the day with an incredible 11 career wins at the Metzeler Ulster Grand Prix.

Metzeler UK Marketing Manager Jim Worland commented; “It’s been a fantastic day of road racing here at the Metzeler Ulster Grand Prix, especially as the weather was kind after so much rain in the build up to the event. The organisers, fans and riders really deserved to see some good action after they worked so hard in adverse conditions earlier in the week.
Guy was so impressive today especially in the feature Superbike race to hold off Michael Dunlop who has been in such strong form this year. He also held his nerve and showed the performance of the Metzeler’s by winning in both the wet and dry today. Congratulations also to Ivan Linton in the Lightweight race, surely a star of the future.

All in all it’s been a great event for us both in terms of results and as title sponsors, we can’t wait to come back next year!”