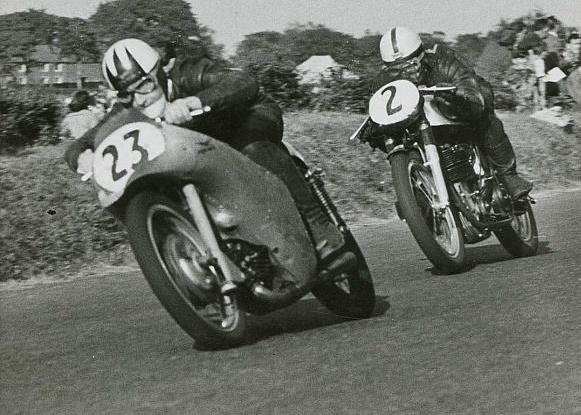 Every month we’ll be profiling a rider whose career has seen them enshrined in the hearts and minds of Ulster Grand Prix fans.

These riders may have been successful, but not always. As it happens this month’s ‘legend’ is actually that, and one could argue the only true world champion.

John Surtees grew up around motorcycles as his father Jack raced sidecars, enjoying much success, and owned a motorcycle shop in South London where John spent his time helping out.

Bitten by the racing bug, John soon turned his attention to competition.

He made a name for himself on the national stage, with one of his most famous outings coming at Thruxton in 1951. At the August Bank Holiday Festival Surtees gave the darling of the British crowd, Geoff Duke, a run for his money and just missed out on victory in the 500cc and 1000cc events.

Being described by the British press as “the man who made Duke hurry”, this marked the arrival of John Surtees the stage was set for his World Championship début just one year later.

At the 1952 Ulster Grand Prix, then held at Clady, he took his Norton to 6th and a single World Championship point on his maiden race in the 500cc event.

Surtees would return to the Ulster, this time at the Dundrod circuit in 1954, contesting the 350cc and 500cc races.

The former saw him retire, but he improved on his maiden 6th place in the premier class race and finished 5th. The result was later struck from the season due to the race being cut short as a result of heavy rain.

Things finally came together for John in the 250cc race one year later at the Ulster when, on the NSU Sportmax, he stormed to victory by a whopping 24 seconds. The jubilation didn’t stop there, as he took 3rd on the Norton in the 350cc race

An outing on the works BMW at the German Grand Prix later that year made the Italian manufacturers take notice and soon led to one of the most legendary partnerships in racing history.

1956, and now with MV Augusta, Surtees claimed his first World Championship in the 500cc class with three wins. He didn’t compete at the Ulster that year due to a broken arm, but was back a year later – to no success

In 1958 John set off on a crusade that would see him obliterate the competition on the world stage on his beloved MV.

He took victory in all but one race in both 350cc and 500cc championships, and that’s only because he didn’t compete at the Swedish Grand Prix.

He did the same the following year, and finished all but two races in both classes on the podium in 1960. His final win in the 350’s came at the Ulster Grand Prix, and he took his penultimate podium finish in the 500cc at Dundrod as well.

After a strangle hold on two wheels that saw him claim seven world titles, John Surtees hung up his leathers but only to don a set of fireproof racing car overalls.

Thus ended another halcyon period for British motorcycle Grand Prix racing and signaled the start of another in Formula One.