fonaCAB are title sponsors of the 2019 Ulster Grand Prix. 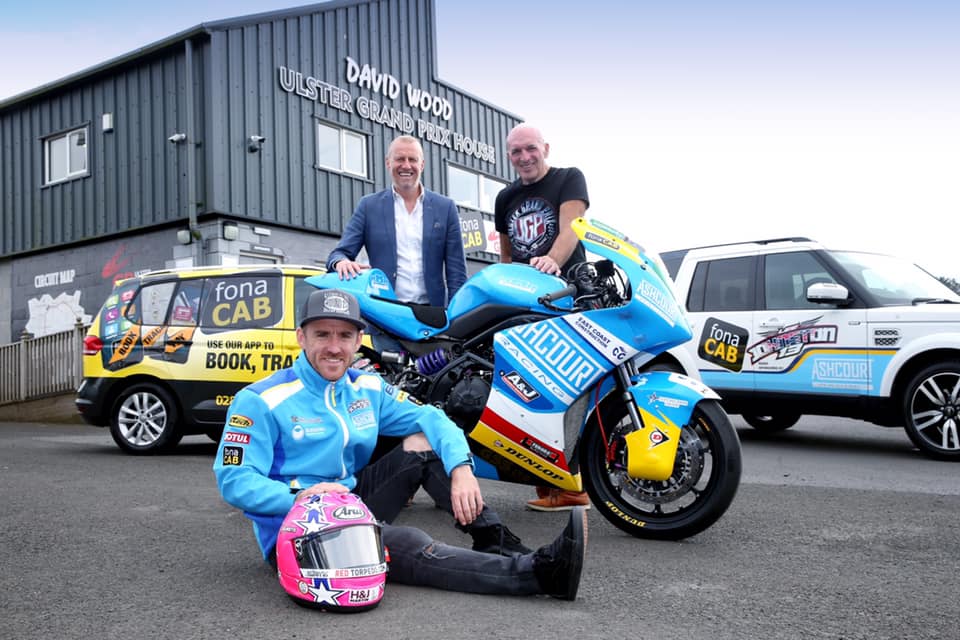 The 2019 Ulster Grand Prix has announced Northern Ireland’s leading taxi company, fonaCAB, will be the title sponsors of this year’s races on 5-10 August.

fonaCAB supported rider, Lee Johnston, joined fonaCAB’S Managing Director, William McCausland and UGP Clerk of the Course, Noel Johnston to make the announcement at the Dundrod circuit today.
“As a lifelong road racing fan and veteran of many visits to Bike Week over the years, I am delighted we will be the title sponsors of the 2019 fonaCAB Ulster Grand Prix.” McCausland said.

“Having sat at Wheeler’s Corner and Quarry Bends enjoying the racing over many years, I know first-hand of the quality of both the course and the competitors and of what’s involved in putting together such a prestigious event, one which we are proud to put our name to.”

The Belfast based company, which takes over 100,000 bookings each week from 21 depots in Belfast and Lisburn, are already major sponsors of local sport and motorcycle racing in particular.

“The fonaCAB brand is becoming synonymous with bike racing in Northern Ireland and our support of the Ulster Grand Prix follows our successful title sponsorship of the 2019 North West 200 and of the Tyco BMW team.” McCausland added.

“We are delighted to have fonaCAB on board as title sponsors for Ulster Grand Prix Bike Week in 2019.” Clerk of the Course, Noel Johnston, said.
“It has provided a big boost just as we are laying our final plans for all the action to begin. William McCausland is a road racing fan and his enthusiasm for the sport is obvious and infectious. As an international road race meeting that attracts global attention, the Ulster will provide a major platform to showcase the fonaCAB brand.”

The Belfast company also provide backing for a growing list of riders.

“Two of our supported riders, Lee Johnston and Paul Jordan, will be competing at the Ulster and fonaCAB also sponsors Glenn Irwin, Jeremy McWilliams, Scott Swan, Simon Reid and Gerard Kinghan who all represent Northern Ireland so well.” McCausland said.

Lee Johnston will arrive at Dundrod chasing a hat-trick of international road race victories in 2019.

The Fermanagh racer has already claimed Supersport wins at the NW200 and Isle of Man TT on the Ashcourt Racing Yamaha YZF-R6.
“It has been a good year so far.’ Johnston smiled.
“People say I have turned a corner but I haven’t been riding any harder. It is just all the little two percents that are coming together and making the difference.’
Johnston’s recent winning streak has ended a lean period for the 30 year old, following a series of crash injuries in recent seasons.
‘It took time to get over those and I wasn’t in the right frame of mind.’ Johnston explained.
“At times I didn’t really feel like riding at all.”
Choosing to run his own team under the Ashcourt Racing banner after a troubled season with the Honda Racing team in 2018 has provided Johnston with a new lease of life.
“I never really got on with the superbike last year.” he explained.
“Organising my own team means I am involved in every little thing. That is a great motivator and has given me a new interest in racing.”
Johnston has also focussed on the short circuits of the British Supersport series in an attempt to sharpen his skills for the roads.
“I did the early rounds and am going to Knockhill this weekend.” Johnston said.
“I really want to win a British Supersport race this year. I’ve beaten Jack and Alastair before and I want to do it again.”
Johnston hopes British championship outings at Snetterton and Thruxton will see him arrive at Dundrod razor sharp. Alongside outings in the Superbike and Superstock races on Ashcourt Racing BMW S1000RRs, he will compete in both Supersport races at the Ulster on the same Yamaha YZF-R he raced to victory at the North West and TT. The Fermanagh man will also ride a Ryan Farquhar built ER6 Kawasaki in the Lightweight division.
Johnston’s finest hour at Dundrod came in 2015 when he claimed a brilliant hat-trick with victory on his East Coast Racing BMW in the Superstock race and a Supersport double aboard the ECR Triumph.
A practice crash in 2016, in which he broke his collarbone, ruled him out of that year’s racing.
The Fermanagh man bounced back with two rostrum finishes in 2017, claiming two third place finishes in the Supersport races on the Padgett’s Honda. Twelve months ago Johnston was runner up in both the Superbike race on the Honda Racing Fireblade and on the Padgett’s CBR600RR in the Supersport race.
“I will get a run out on my superbike before the Ulster but the main focus must be on the Supersport class.” Johnston explained as he sets his sights on the top step of the rostrum and that hat-trick of 2019 international road race victories at the Ulster.
“I’ve only two Supersport wins to my name at the internationals but loads of podium finishes so it’s time I got my finger out and really made it count.”