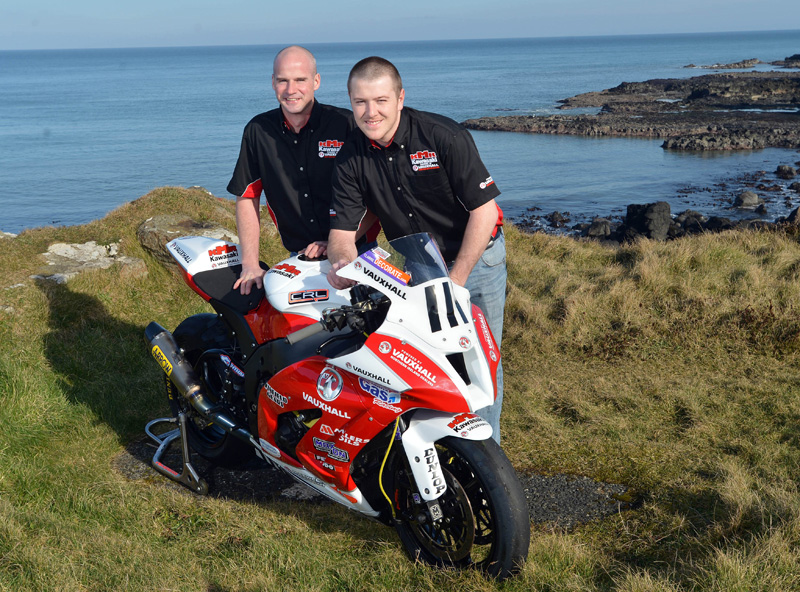 Brian McCormack swells KMR Kawasaki ranks to four Waterford’s Brian McCormack is the latest recruit to the ever expanding Vauxhall KMR Kawasaki squad. The reigning 2012 Adelaide Masters champion will be joining the squad for a concerted attack on both the International and National road races on the Ryan Farquhar prepared ZX10R Kawasaki Superbike. McCormack is scheduled to contest the Ulster Grand Prix, Vauxhall International North West 200 as well as the Isle of Man TT. His first outing for the team is expected to be at the Cookstown 100 road races on Saturday April 28th and Brian is excited by the prospect.

“I’m delighted to be joining Ryan and his team and it’s a tremendous opportunity for me, one I intend to firmly grasp with both hands.” Brian said as the deal was announced. “I know how hard Ryan works and how meticulous he is in his preparation so I’m thrilled to be getting the chance to ride the bikes he’s won so much on. This will be my third full season on the roads and with Ryan’s knowledge, expertise, advice and machinery, I’m confident of improving even further and moving up the leaderboard.”

The 29 year old, who has become a regular at both the International and National road race meetings in recent seasons, was without a ride for 2013 before Vauxhall KMR team boss Ryan Farquhar’s intervention. Farquhar explained how the deal was forged for McCormack to join Jamie Hamilton, Connor Behan and James Cowton in the squad. “I got talking to Brian at the recent Adelaide Awards night and when I found out he was without a ride, I started to put the wheels in motion. I’ve known him for a good few years now and had some good battles with him so I know what he’s capable of and we’ve put together a good package for the season. A rider of his calibre shouldn’t be on the sidelines and with his experience and my experience, I think we’ve got all the makings for a really strong season.” “He’s proven himself on the roads over the past couple of seasons and is going from strength to strength so I think we can help move him up to the next level and I’m very happy to have helped him get back on the grid for 2013. It’s good for all concerned to have a rider of his profile in the team and he’ll ensure we’ve got a really strong presence in the 1000cc classes, both at the International and, especially, the National road races.”