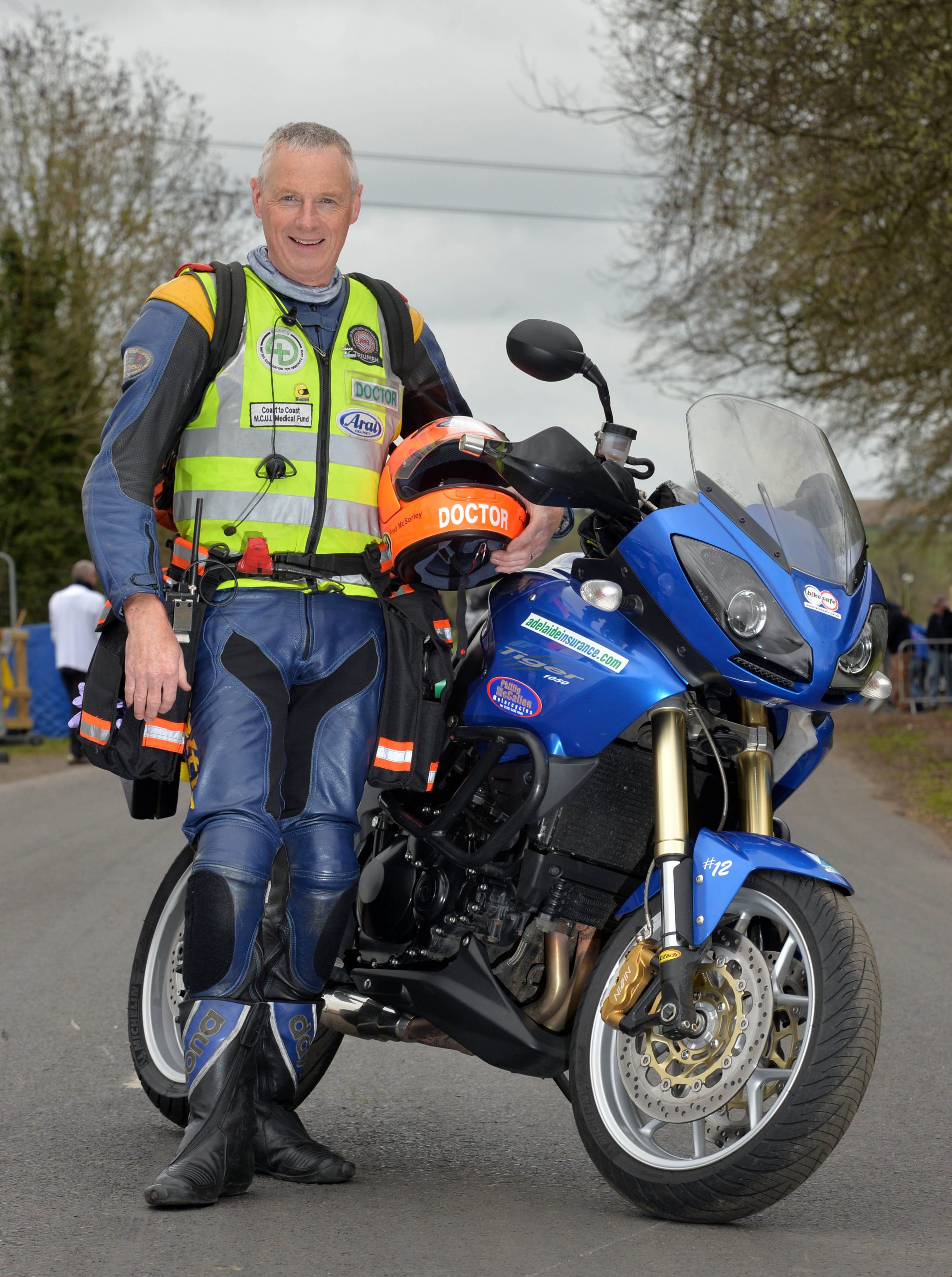 Dr Fred MacSorley MBE, the world-class road racing medic, is set to hang up his leathers for the last time this Saturday after the MCE Ulster Grand Prix finishes.

The highly regarded GP from Lurgan, who has unquestionably saved many lives at the roadside over the course of his 30-year service to road racing, will be honoured with a parade lap after the roads close at Dundrod on Saturday morning.

‘Doctor Fred’, as he is affectionately known by the road racing community, will lead the lap with his wife Dr Alex Magee riding pillion, followed by the entire medical team and every competitor in Saturday’s races.

“I have mixed emotions about retiring,” said Dr MacSorley. “It has been a massive part of my life and I will miss it hugely. It has been such a huge privilege to be part of the motorcycling community, and an absolute honour to have looked after, in my opinion, some of the greatest sports people in the world.

“The last 30 years have been wonderful,” he continued. “I’ve seen the goodness of human nature; how people deal with both success and tragedy with dignity and the unbelievable support that this community offers to its members.

“And of course on our part it has been a team effort from the vans, the paramedics, the doctors, Jan Simm and her team, the chaplains; we can’t function without the full line up.

“I can’t talk about the team without paying tribute to Dr John Hinds. He joined us as a student and his brilliance was immediately obvious. We asked him to come back when he qualified and he was one of the most extraordinary talented, generous and hard working doctors I have had the privilege of working with.

“His legacy will live on for many years to come and I hope he’s proud of the way the team continued in the aftermath of his untimely death.”

Dr MacSorley, who officially retired from his role as GP in April, is handing over the baton to a team of three paramedics including his son, Allister MacSorley, Paul Roycroft and Jason Rosborough.

“I had planned to retire earlier but it was important to take the time to teach the three lads to take over and I’d like to thank the race organisers for being so patient with the transition.

“I am very confident that the team is in good shape and I know it’s the right time for me to go.”

He continued: “My wife Alex recently retired from her role as clinical geneticist and the parade lap is a wonderful chance for me to take her for a spin and give her an inclination of what her husband has been up to all these years!

“My son Allister will obviously take part in the lap with the medical team, my other two sons David and Peter are also both doctors and David will be there to watch, although Peter is currently on a cycling tour in Canada so he’ll miss it.

“I can’t pay enough tribute to my wife and family for their unselfish support over the years. It wouldn’t have been possible to achieve a tenth of what I have without them.”

Dr Fred was presented last year with a replica of one of his helmet’s from Arai, which he wore at the 2016 MCE UGP and which he will wear again for his parade lap. The same helmet will be auctioned at a black tie retirement on 22nd September at Armagh City Hotel, dinner organised to raise funds for the MCUI Medical Team.

Asked about what he’ll miss most after Saturday’s racing at Dundrod, Dr MacSorley said: “The camaraderie with the team, the marshals, the officials and the competitors – everyone really. It’s been a pleasure to work with them all.

“I’ll also miss the privilege of riding on one of the finest road circuits in the world without worrying about oncoming traffic!

“But on Saturday, if we have a safe day without any serious injuries, it’s a success in my book,” he finished.

Clerk of the Course at the MCE Insurance Ulster Grand Prix Noel Johnston said: “It has been an incredible honour to know and work alongside Dr Fred for so many years.

“The work he, Dr John and the whole medical team have done has been invaluable, there aren’t really any words to describe the contribution they’ve made to the sport, nor the number of lives they’ve saved.

“Road racing is all the better for Dr Fred’s involvement and while we will miss him, I wish him all the best in the next chapter of his life and look forward to working with the next generation.

“After all, they have been trained by the very best,” he added.

Dr Fred’s parade lap will take place after roads close for racing, at approximately 09.45 on Saturday morning at the Dundrod circuit, home of the MCE Ulster Grand Prix.